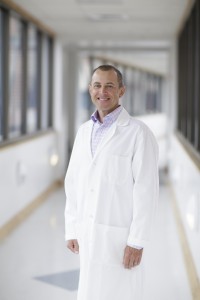 Despite continuing improvements in the ability to treat individuals with type 1 diabetes (commonly referred to as juvenile diabetes), the need to identify a true cure for the disease remains. In an attempt to meet this need, Dr. Mathews performs studies seeking to improve our collective understanding on the means by which type 1 diabetes develops, both in humans and in mouse models of the disease. His efforts are extremely novel in that while the majority of researchers addressing the notion of how the disease develops focus on identifying defects in cells of the immune system, the guiding hypothesis of Dr. Mathews‘ research is that insulin-secreting pancreatic beta cells are active contributors to the processes that leads to type 1 diabetes. This concept was birthed through his early works, demonstrating that beta cells had unusual reductions in their self-defense mechanisms and that this reduction was important in the initiation of type 1 diabetes.His studies later demonstrated that beta cells from different strains of mice varied in their resistance to destruction by the immune system. These novel findings proved to be highly influential to the research community since prior to these efforts, evidence suggesting that beta cells could resist immune destruction did not exist. These findings also led him to postulate that genetic factors related to this feature may underlie natural resistance to type 1 diabetes; a concept for which has recently found support.Dr. Mathews’ continuing attempts to discover genes that beta cells naturally employ to ward off destructive mechanisms used by the immune system will undoubtedly have important ramifications for efforts in organ transplantation, stem cell engineering and pharmacological-based studies seeking to cure type 1 diabetes.