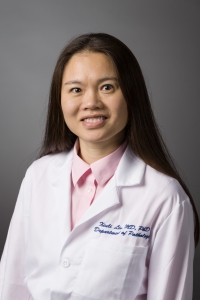 Dr. Liu currently works in a multidisciplinary environment at UF and regularly interacts with gastroenterologists and hepatologists, as well as colorectal, hepatopancreatobiliary and transplant surgeons. Prior to this, Dr. Liu practiced internal medication for five years, in addition to working in gastrointestinal and hepatopancreatobiliary pathology at the Cleveland Clinic Department of Pathology, one of the busiest and demanding pathology departments in the United States. These combined experiences allow Dr. Liu to truly understand the clinical implication of pathologic diagnoses and guide treating physicians in selecting the most effective therapies for their patients.

An accomplished author, Dr. Liu has published more than 100 peer-reviewed articles, mostly focused on difficult and challenging entities in the gastrointestinal and hepatopancreatobiliary pathology. She has also written seven book chapters on the human esophagus; frozen interpretation of gastrointestinal specimens; and the diagnosis of inflammatory bowel disease and neoplasia, as well as colonic polyps.