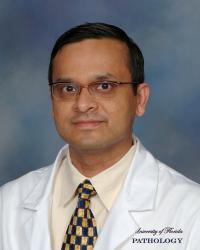 Indraneel "Neel" Bhattacharyya, DMD, PhD, earned his oral and maxillofacial pathology training at the Indiana University School of Dentistry in 1995 and his master’s degree in 1996. Dr. Bhattacharyya received his DDS degree from the University of Nebraska Medical Center's College of Dentistry. He is also a diplomate of the American Board of Oral and Maxillofacial Pathology.

Dr. Bhattacharyya taught at the UNMC College of Dentistry for six years, where he won four annual teaching awards. He has been at the University of Florida College of Dentistry in the Department of Oral Surgery & Diagnostic Sciences since 2003 and was awarded the 2004 - 05 Teacher of the Year Award. He is the Director of the Oral & Maxillofacial Pathology Residency Program at the UF College of Dentistry and also serves on the Fellowship Examination Committee of the AAOMP.

Dr. Bhattacharyya is actively involved in a large clinical oral pathology practice and biopsy service and has authored or co-authored more than 40 papers and book chapters that cover a diverse range of topics addressing both clinical and microscopic aspects of oral and maxillofacial pathology. He is actively involved in several NIH and industry-funded research projects, studying bisphosphonate-induced osteonecrosis of jaws, molecular and clinical aspects of precancerous oral lesions and Sjögren’s syndrome. Dr. Bhattacharyya is a sought-after speaker in the region and continues to present numerous lectures throughout the state of Florida.

His research interests include precancerous lesions of the oral cavity that are associated with tobacco use. Dr. Bhattacharyya is also interested in the cause and treatment of various common oral lesions of autoimmune origin, such as lichen planus, pemphigoid and lupus. He has published numerous articles and contributed to books on various topics of oral pathology and oral medicine and has worked extensively with schools, county health departments and other non-profit agencies in increasing awareness of the oral effects of tobacco use.