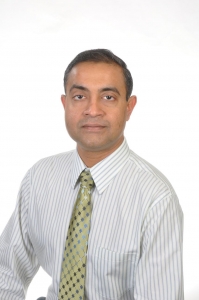 Nadim M. Islam, DDS, BDS, completed his oral pathology training at the University of Florida College of Dentistry Department of Oral & Maxillofacial Pathology in 2007. There he held a dual appointment as a research fellow in oral & maxillofacial pathology and craniofacial pain & temporomandibular dysfunction management prior to accepting his position at Indiana University School of Dentistry.

Dr. Islam received his degree in dentistry from the Dr. R. Ahmed Dental College and Hospital at the University of Calcutta, Calcutta, India in 1989. After receiving his dental degree, he practiced general dentistry in several locations throughout India and then worked for our years as a general dentist with the Ministry of Health, Kingdom of Saudi Arabia. He started at IUSD in 2007 and worked as an assistant professor and director for the Oral Pathology Biopsy Service & Laboratory until 2012. He received his United States DDS degree from the Indiana University School of Dentistry in 2010.

Additionally, Dr. Islam has authored or co-authored more than 20 papers and several book chapters on myriad topics, addressing both clinical and microscopic aspects of oral and maxillofacial pathology. His scholarly interests include tobacco-associated oral precancerous lesions and various mucocutaneous conditions of autoimmune origin. Dr. Islam has a special interest in chronic ulcerative stomatitis, and he has made a major contribution to the literature on this condition. He has also published extensively on various topics of dermatopathology, oral pathology and oral medicine in peer-reviewed medical/dental journals. Dr. Islam is especially interested in diagnostic surgical and clinical oral pathology, as well as dental education.