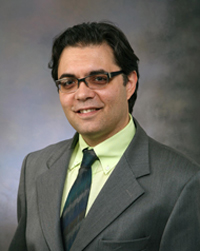 RESEARCH INTERESTS
As Marie-Curie Fellow at the Rega Institute (Leuven, Belgium), and post-doctoral scientist with Walter M. Fitch at
the University of California, Irvine (USA), Dr. Salemi has become an internationally recognized expert in the field of
molecular evolution of viruses and phylogenetic analysis. During the last ten years, as faculty at the University of
Florida, Gainesville (U.S.A.), his interests have included molecular epidemiology, intra-host viral evolution, and the
application of phylogenetic and population genetic methods to the study of human and simian pathogenic viruses.
More recently, he has been applying the Bayesian coalescent framework to study the molecular evolution and
phylogeography of emergent and re-emergent bacterial pathogens, such as MRSA, Salmonella and V. cholera, using
genome-wide SNPs.