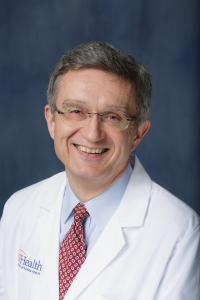 Petr Starostik, MD, is the director of molecular pathology for University of Florida Health Pathology Laboratories. He oversees the development of new diagnostic assays based on next-generation sequencing (NGS) and their implementation in patient care.

Before starting his work in his most recent appointment, Dr. Starostik honed his clinical expertise across nearly two decades serving as both a medical and technical director of molecular diagnostics for three eminent academic institutions. He was the director of the Molecular Diagnostics Laboratory at the Roswell Park Cancer Institute Center for Personalized Medicine in Buffalo, N.Y., beginning in 2002. Before that, he founded a molecular diagnostics laboratory at the Institute of Pathology of the Wuerzburg University in Wuerzburg, Germany, in 1997.

Dr. Starostik is board-certified in hematopathology, as well as clinical and molecular genetic pathology by the American Board of Pathology. He completed a fellowship in hematopathology in 1997 at the University of Texas MD Anderson Cancer Center in Houston, Texas, following his 1995 residency training in laboratory medicine at the Washington University School of Medicine in St. Louis, Mo. His medical degree was earned in 1984 from the Vienna University School of Medicine in Vienna, Austria.

Throughout his career, Dr. Starostik has authored more than 80 journal articles, abstracts, book chapters and other publications on NGS, and he has been an active member of several professional organizations, including the Association for Molecular Pathology; the American Association for Cancer Research; and the American Society of Hematology.

Currently Involved In: Dr. Starostik's research explores the role of genetic aberrations in the development of malignancies and their use as tumor markers and prognostic factors. He also studies the genetic aberrations that occur during cancer development and applies the latest basic research results in the development of new molecular diagnostics tests. The foci of his ongoing investigations are the changes in gene expression that occur in acute myeloid leukemias (AML), which are positive for the FLT3 ITD mutations. This promising research is of considerable therapeutic and prognostic significance, as these mutations occur in up to 30 percent of AML cases.